This is the first of a series about Rhodesia.

“I contend that we are the first race in the world, and that the more of the world we inhabit the better off it is for the human race.”*—Cecil Rhodes

It was an especially bald statement of the aims of British imperialism. But Rhodes was by no means the only man to express such ideas. The difference lay in the preference by most to clothe the idea in poetic or idealistic language that was in fact felt quite sincerely. Belief in the Empire was a  faith that provided a quasi-religious feeling of purpose and sense of meaning in life.

Listen for instance to the words of John Ruskin delivered in 1870 as part of his inaugural lecture as Slade Professor of Art at Oxford University. The noted art critic and cultural observer said: “There is a destiny now possible to us—the highest ever set before a nation to be accepted or refused…. [W]ill you, youths of England, make your country a royal throne of kings; a sceptered isle for all the world a source of light, a centre of peace.”**

He went on to speak of an ethical choice between two styles of rule: “There are the two oriflammes  [banners carrying inspiring symbols]; which shall we plant on the farthest islands,—the one that floats in heavenly fire, or that hangs heavy with the foul tissue of terrestrial gold?”

Rhodes is said to have owned a longhand copy of Ruskin’s speech—though the words about the “foul tissue of terrestrial gold” seem not to have made an impression. The lecture was delivered not long before the 18-year-old Rhodes sailed to South Africa to stay with his brother for reasons of ill health. It would have been hard for anyone to imagine that the frail, awkward young man could ever come to possess untold riches founded in diamonds and gold. By chance he arrived in Kimberley just as his brother staked a claim on Colesberg Kopje—an unpromising-looking hill soon to yield immense fortunes in diamonds. And brother Herbert had no particular talent for business. But Cecil had the ambition, the ruthlessness, and the gift for strategizing that were to win him such great success.

For eight years he would shuttle between South Africa and Oxford, where he continued unenthusiastic studies at Oxford’s Oriel College and finally obtained his degree in Latin and Ancient History. While away from Kimberley, he was writing to mine managers about details of the water table and questions of production efficiency at the diamond operations.

He was unprepossessing in his manner, speaking with hesitation in a squeaky voice, but at the same time he had what he called “big ideas.” As Thomas Pakenham described it in The Scramble for Africa, he could swing between “extravagant or contradictory”  ideas, and yet “South Africa hungered for leadership and many people began to look on Rhodes as their man of destiny.”#

Early on—in 1872—he wrote a will that left the fortune he hadn’t quite made yet (but confidently expected) to the secretary of state for the colonies, stating that it should be used for the Empire’s expansion. In 1877 he made a second will specifying that his forthcoming fortune should be used to form “a Secret Society, the true aim and object whereof shall be the extension of British rule throughout the world… and especially the occupation by British settlers of the entire Continent of Africa, the Holy Land, the valley of the Euphrates, the Islands of Cyprus and Candia, the whole of South America, the islands of the Pacific not heretofore possessed by Great Britain, the whole of the Malay Archipelago, the seaboard of China and Japan, the ultimate recovery of the United States of America as an integral part of the British Empire, the consolidation of the whole Empire, and finally the foundation of so great a power as to hereafter render wars impossible and promote the best interests of humanity.”##

This remarkable and preposterous document did not become public until after his death. Surely the reaction would have been bewildered laughter.

In 1881 Rhodes was elected to parliament of the Cape Colony as a member for Barkley West, near Kimberley in the colony’s northeastern corner. He began working toward expansion to the north, into what would become the Bechuanaland Protectorate. He saw this as a “Suez Canal” opening up British trade with the interior. 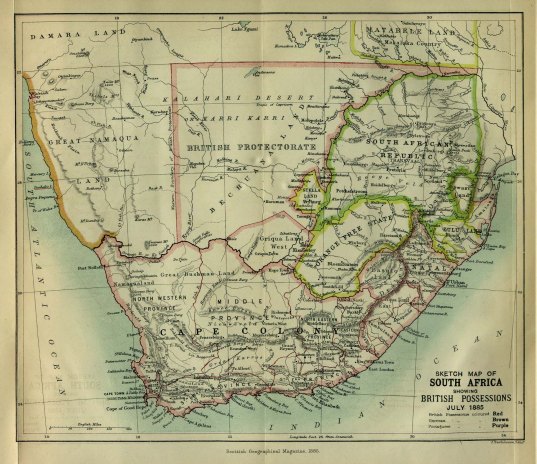 In 1886 the gold rush started on the Witwatersrand, and of course Rhodes got in on that right away. His political power increased, and he became Prime Minister of the Cape Colony.

In his geographical scheming, Rhodes was constantly dealing with the inconvenient neighbors—the Boers of the Transvaal and the Orange Free State, who always looked likely to make a territorial grab. Also worrying were the Germans, latecomers to the Africa scramble, who in 1884 took up possession of what was to be called German South West Africa (now Namibia). On the other side stood Portuguese East Africa (Mozambique), which lay just beyond the eastern Transvaal border.

And then there were the Africans.  Rhodes was especially concerned with those who resided north of the Limpopo and south of the Zambezi—in the lands known as Mashonaland and Matabeleland. Gold had been mined in Mashonaland in centuries past, and in 1867 a prospector named Carl Mauch had found auriferous quartz there in the region of ancient ruins known as Zimbabwes. He claimed the quartz was extraordinarily rich in its gold. It seemed essential to Rhodes to win control of this territory. But for the time being, it was ruled by a man called King Lobengula.

Next: Lobengula and the concession hunters. 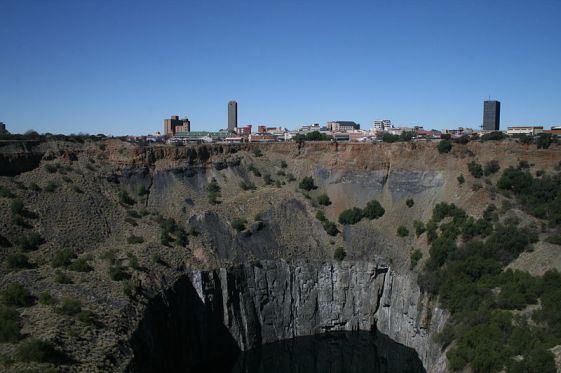 The Big Hole of Kimberley with the present-day city.

* From an undated document quoted in Arthur Keppel-Jones, Rhodes and Rhodesia.  Kingston and Montreal: McGill – Queens University Press, 1983. This is an excellent and very detailed book.

I am an off-trail hiker, a student of history, and author of "Transvaal Citizen," "Murder at the Jumpoff," and "The Twelve Streams of LeConte."
View all posts by Jenny →
This entry was posted in African History, British History, History, South African History and tagged Cecil Rhodes, Coleberg Kopje, John Ruskin, Kimberley diamonds, Lobengula, Mashonaland, Matabeleland, Rhodesia, Witwatersrand. Bookmark the permalink.