This is one of a series about memoirs, novels, and poems authored by combatants of the First World War. All page numbers below refer to David Jones,  In Parenthesis. New York: New York Review Books, 2003. Originally published 1937.

A reader who can’t let go of literal and linear modes of thought will have trouble with In Parenthesis by David Jones. Everything about the work blurs the categories. It was published by a man known as an engraver and printer, not a writer. He had served in the war from 1915 to 1918 but seemed at the time more like a child than a soldier. The photo of him above shows him looking frail and vulnerable. How could this person fight at the Somme and at Ypres?

It’s hard to know even what to call this work. I’ve seen it labelled as an epic poem, a prose poem, and a “deconstructed novel.” But the likes of Yeats and Eliot peered into its pages and liked what they saw. Eventually it won the Hawthornden Prize. In the 21st century world of corporate editors, I don’t think it would have been published at all. I say that, even though personally I think it is a great work.

I first learned of Jones in an essay by the poet Tom Sleigh in Poetry magazine, November 2013. Sleigh homed in on Jones’ use of Cockney rhyming slang, his standing shoulder to shoulder with the ordinary foot soldiers in their struggles with “the Brass.” He drew a contrast between Jones and Wilfred Owen, an officer, man of a genteel social class. Sleigh admired Owen as well, but he argued that Jones was the one who gave us the true feel of the moment, the grind and fatigue and the wise-ass banter among the men. There was no elegiac elegance in Jones (a thing Owen did so well), there was no overarching interpretation, no wringing of hands at the horror of war. Just the smell of it, the very taste and smell of the fleeting here-and-now. 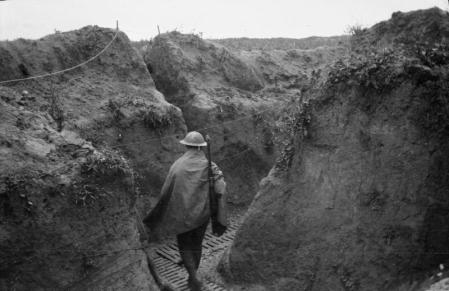 Moving up for the Mametz attack. From the Knatchbull Collection. Jones fought at Mametz.

And so, on the very first page, we are plunged into the predicament of Private John Ball—Jones’ alter ego. No setting of the scene, no introduction. We hear the barking of the captain as he hustles the untested men into parade ground order. They are about to sail to France.

Now Jones goes into a different voice as he describes the sounds of the men moving in formation.

“Heavily jolting and sideway jostling, the noise of liquid shaken in a small vessel by a regular jogging movement, a certain clinking ending in a shuffling of the feet sidelong—all clear and distinct in that silence peculiar to parade grounds and to refectories. The silence of a high order, full of peril in the breaking of it, like the coming on parade of John Ball.

“He settles between numbers 4 and 5 of the rear rank. It is as ineffectual as the ostrich in her sand. Captain Gwynn does not turn or move or give any sign.

Jones’ father was Welsh, and Jones chose to enlist with the Royal Welsh Fusiliers. Wales, to him, was a land of myth and tradition subjugated by the dominant order—the speakers of English. He spoke only English himself growing up (he taught himself Welsh later on), as his grandparents believed that the speaking of Welsh handicapped a person in making progress in the world. As a sensitive lad who saw the world differently than most people, Jones had a sympathy for the downtrodden and the conquered.

His regiment consisted partly of Welshmen and partly of those Londoners born within earshot of the Great Bell of Bow. As Jones said in his preface, “As Latin is to the Church, so is Cockney to the Army, no matter what name the regiment bears.” (xii)

By tradition. a true Cockney is born within earshot of the bell of St. Mary-le-Bow in Cheapside, London.

Bits of Cockney rhyming slang crop up like vigorous weeds: “Get ready, me china-plate” (158), as a fellow says to his neighbor in the trench—“plate” = “mate.” You can hear the voices singing in your ear. As when an officer calls into the trench to the men to clean their rifles:

The man is coming to inspect, but they have neither hot water nor oil to do the job:

“Got any oil.
Why don’t you go to Sergeant and get
for yourselves,
Why didn’t you ask the Quarter-bloke
back there.
Only a drop, china, just for the bolt—just a spot—be a kind virgin—he’s coming round the bend—he’s doing No. 5—just a spot.” (63)

This rough talk makes its own poetry, if poetry can be described (as I think it can) as loose and allusive, concrete and vivid, rhythmical, repeating in refrains. And underneath all this chanting, bantering talk flows an underground stream of legend and myth, for Jones gives us stories of ancient Wales and Britain. As he tells us in his own notes to the poem, he speaks of:

—frozen regions of the Celtic underworld, which Jones associates with “intense cold and yet lights shining”
—King Arthur’s descent into Hades to obtain the magic cauldron which would hold the drink of no coward
—the raid of 300 Welsh of Gododdin into the English kingdom of Deira, when only three survived. Of one brave Welshman it was said, “His sword rang in mothers’ heads.” Jones gives the Welsh, which has an inscrutable look: “Seinnyessit e gledyf ym penn mameu.”

The Gododdin, one of the earliest Welsh texts to mention King Arthur.

So we have the transcriptions of soldiers’ talk with the gleaming strands of myth interwoven all through. Atop that, like urns or bowls found in an archeological layer of Troy, we have objects and words from the ordinary lives of the troops. “Gooseberries” were arrangements of barbed-wire hoops. “Johnson hole”—large shell hole called after a mythical Jack Johnson. “Cushy”—any easy time or comfortable place. “Wipers”—Ypres, but “only proper in the mouth of a man out before the end of 1915”. “Square-heads”—Germans. “Toffee-apples”—English trench-morter projectiles. “Ox-blood kid”—officer’s servant who uses ox-blood polish to clean Sam Browne belts, etc. “S.R.D.”—stamped on every ration rum-jar, interpreted by the troops as “Service Rum Diluted.” “Woolly Bears”—heavy German shrapnel.

And atop that in turn lies a layer of description that is intense color and movement seen not according to the way anyone else would have seen it. Take this moment from Mametz Wood, when John Ball encounters an enemy in the brush. The enemy has a stick bomb; he has a grenade.

“You loose the thing into the underbrush
Dark-faceted iron oval lobs heavily to fungus-cushioned dank, wobbles under low leaf to lie, near where the [enemy’s] heel drew out just now; and tough root-fibres boomerang to top-most green filigree and earth clods disturb fresh fragile shoots that brush the sky.
You huddle closer to your mossy bed
you make yourself scarce
you scramble forward and pretend not to see,
but ruby drops from young beech-sprigs—
are bright your hands and face.
And the other one cries from the breaking-buckthorn.
He calls for Elsa, for Manuela for the parish priest of Burkersdorf in Saxe Altenburg You grab his dropt stick-bomb as you go, but somehow you don’t fancy it and anyway you forget how it works. You definitely like the coloured label on the handle, you throw it to the tall wood-weeds. So double detonations, back and fro like well-played-up-to service at a net, mark left and right the forcing of the grooves.” (169)

That colored label on the stick bomb: does this mean Jones is so indifferent to the death-cries of his foe that he focuses on a trivial detail? Shouldn’t he have said something to excuse himself, to explain himself? But the whole point of this work is that it has no explanations, only the honest recounting of experience. 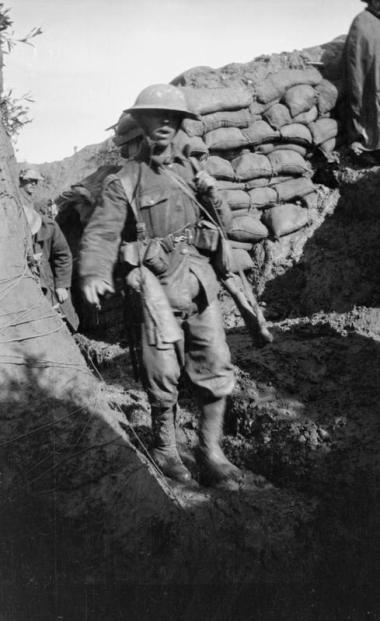 You can reduce the whole poem to a simple sequence, if you like. Part 1—John Ball’s battalion goes to France. Part 2—They move to the front. Part 3—They make their way by road and trench to the front line. Part 4—A typical day on the front line. Part 5—They go into reserve and march toward the Somme. Part 6—They take their positions in preparation for the Battle of Mametz Wood. Part 7—They fight a severe battle. Many are killed and many wounded, including Ball, who is wounded in the leg.

Jones returned to the front after a period of convalescence. But his poem ends with Mametz, as that undoubtedly formed the hardest hour of his war experience. It was a place of vicious combat such as the wood where the last king Llewelyn of Wales was killed. As Jones wrote in a note, “His contemporary, Gruffyddap yr Ynad Coch, sang of his death: ‘The voice of Lamentation is heard in every place… the course of nature is changed… the trees of the forest furiously rush against each other.” (22)

Read it if you can. Don’t try to understand every reference, though much is explained in the notes. Just read it for its truth to one man’s experience of the war.

I am an off-trail hiker, a student of history, and author of "Transvaal Citizen," "Murder at the Jumpoff," and "The Twelve Streams of LeConte."
View all posts by Jenny →
This entry was posted in History, Military History, World War I and tagged David Jones, In Parenthesis, Mametz Wood, Royal Welsh Fusiliers, WWI poetry. Bookmark the permalink.

6 Responses to Words of endurance: The greatest WWI poem—In Parenthesis