Newfoundland Regiment at the Somme 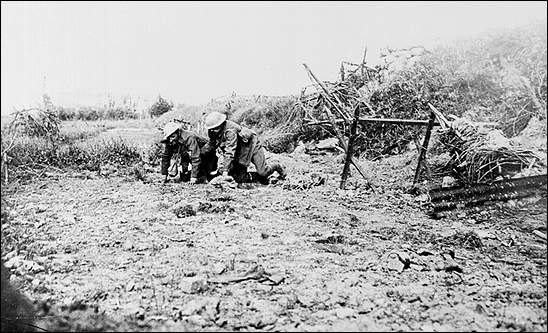 Wounded solider of Newfoundland Regiment being brought in.

On the first day of the Battle of the Somme, July 1, 1916, the Newfoundland Regiment (designated the Royal Newfoundland Regiment in 1917) participated in the massive Allied advance toward German lines. They were part of the 88th Brigade in the 29th Division of the British Army, under command of Major General Beauvoir De Lisle. Within 30 minutes, all but 110 of 780 men were dead or wounded.

It was the single worst day for casualties in the history of the British Army, which had about 60,000 killed or wounded that day. (Total casualties in the five-month-long battle, on both sides, were around a million.)  Although the Germans were forced back from lines of defense in one sector, from Foucaucourt-en-Santerre to the Albert-Bapaume Road,  Allied forces did not fare so well between the Albert-Bapaume Road and Gommecourt.

At the time of the war, Newfoundland was not a Canadian province but a British Dominion (a colony until 1907). It would not join Canada until 1949. Its population numbered 240,000, with somewhere in the neighborhood of 40,000 living in the city of St. John’s. Outside the city, which boasted electric lights, trolleys, and a moving-picture theatre, most people lived in small fishing villages around the coast. The interior remained wild, and famous sportsmen such as Frederick Courtney Selous ventured there to hunt caribou and fish the streams.

In the villages, residents joined hands in working in seasonal activities such as preparing the stage in May where cod would be split, salted, and dried over the summer. When the fishing season ended, many of the men would go to their “tilts” (log cabins) in the woods to cut firewood and staves for the barrels used to ship the fish. By the late 1800s, lumber mills and mines also provided employment. Women tended garden plots of turnips, carrots, parsnips, and beets, which were harvested and kept in root cellars. Wives and children also carded and combed fleece to make woollen clothing.

Although no formal military organization existed in Newfoundland at the time of the war, the government of the dominion was able to recruit volunteers to serve in the British Army.  They trained in the UK and reached battalion strength of 1,000 before being deployed as part of the 29th Division at Suvla Bay in the Gallipoli Campaign. They fought in the Second and Third Battles of Krithia in May and June 1915. The experience inspired a line in a Newfoundland song titled “Recruiting Sergeant”: “And on the sands of Suvla, they entered into hell.”

The 29th remained in Gallipoli until it was evacuated January 1916 and transferred to Egypt before going to France in March. The division spent the next three months behind the lines in training to prepare for an offensive planned against the German-held village of  Beaumont Hamel—just one small part of the overall offensive of the Somme.

The Newfoundland men found life there to be a strange combination of tedium and fear—nearly every day shells came over into the trenches, killing or wounding another few men. Lt. Owen Steele of St. John’s wrote home almost daily, and there were usually two subjects: the incidence of casualties from shelling, and the food. Pork pudding was a favorite. A third subject was invariably addressed in the final line: the weather. “Dull but no rain today. Cold at night.” Perhaps this faithful report of the weather reflected the importance of that subject in a place so dependent on fishing, logging, and other outdoor activities.

One of the perennial notions of military strategy is to soften up the opposition with an  artillery bombardment before sending in the infantry. For seven days in advance of the attack British artillery laid down a barrage, but its effectiveness was limited by the deep dugouts and tunnels the Germans had constructed during their 20-month occupation of the Beaumont Hamel area. The finishing touch of the “softening up” phase was the detonation of a 40,000-lb. mine under the German Hawthorn Ridge Redoubt.

Explosion of Hawthorn Ridge mine.

This was the signal for the 86th and 87th Brigades of the 29th to rush toward the German lines. Unfortunately, it also served as a signal to the Germans of the 119th (Reserve) Infantry Regiment of the Wurttemberg Division to prepare for an attack. The defenders rose from their dugouts, went to the firing lines, and effectively stopped the British advance. The Tommies were not even able to occupy the mine crater as they had planned. The first two brigades got no further than the German barbed wire—many of them indeed were mowed down well short of the barbed wire in No Man’s Land.

General De Lisle is said to have received conflicting messages from observation posts. Among other things, it’s possible that German flares were mistaken for signals from his own brigades, giving him the mistaken impression that his men had broken through the German line. He ordered two battalions to press through these perceived breaks in the line: the Newfoundland Regiment and the 1st Battalion of the Essex Regiment.

From the Newfoundland Regiment’s own “St. John’s Trench,” the communication trenches leading forward were virtually filled with dead and wounded men of the 86th and 87th who’d been shot just as they’d gone over the top or perhaps gotten a bit further and crawled back to shelter. And with shellfire also making the trenches a rather unpleasant environment, battalion commander Lt. Col Arthur Hadow decided to have his men advance over the surface. They came under heavy fire before they even reached their own barbed wire defenses. With the first two brigades essentially out of action, the men advancing now were the only troops visible to the Germans. Most of the Newfoundland Regiment died or fell wounded within 20 minutes of leaving their trench. Some made it as far as the Danger Tree, a limbless, shell-damaged stump in No Man’s Land.

It is estimated that 22 officers and 758 men of other ranks participated in the advance. All of the officers and 658 other ranks were killed or wounded. The loss to the close-knit communities of Newfoundland was incalculable.

In 1921 the people of Newfoundland purchased a 74-acre site on the battlefield as a memorial to the men killed or wounded there on the first day of the Battle of the Somme, which continued to be fought until November 18, 1916. A statue of a caribou was chosen as an appropriate symbol of their homeland, and the Beaufort Hamel Newfoundland Memorial site was officially opened June 7, 1925, unveiled by Field Marshal Douglas Haig.

It is the largest battalion memorial on the Western Front and the largest portion of the Somme battlefield that has been preserved. It is still possible to see the outline of the trenches, as well as to visit a number of memorials and cemeteries. But I would tread carefully there, for the place is haunted by countless ghosts. 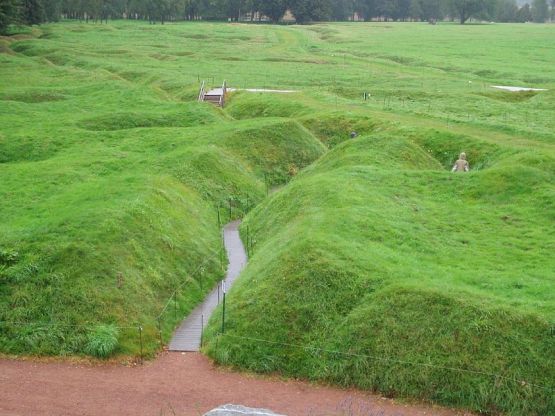 The Beaumont Hamel site as it looks today.

I am an off-trail hiker, a student of history, and author of "Transvaal Citizen," "Murder at the Jumpoff," and "The Twelve Streams of LeConte."
View all posts by Jenny →
This entry was posted in Military History, World War I and tagged Battle of the Somme, Beaufort Hamel, General Beauvoir De Lisle, Hawthorn Ridge mine, Newfoundland Regiment. Bookmark the permalink.

23 Responses to Newfoundland Regiment at the Somme