Ridicule and rifles: The Bayonet Constitution 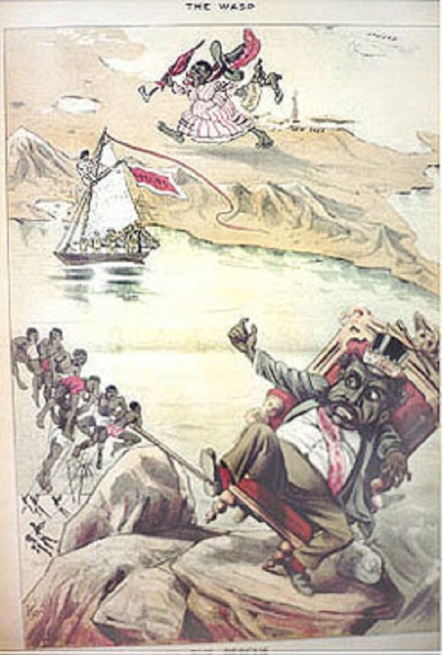 Cartoon about the Bayonet Constitution. King Kalakaua in foreground, Queen Kapiolani in background. The racial imagery is especially nasty, in particular as it concerns the queen.

This is the seventh installment of a series about King David Kalakaua of Hawaii and the final one that concerns him in particular. After studying the subject for the past two months, I find myself haunted by the question, “Could the Hawaiian monarchy have survived?” In my next post, I will attempt to answer this in my own way.

Whatever his flaws, Kalakaua kept things lively. He repeatedly threw out and replaced his ministers. He kept the white community abuzz when he established a secret society called the Hale Naua. People gossiped that its members practiced nefarious rituals. (In fact, it was dedicated to studying and preserving ancient Hawaiian beliefs.*) He placed government finances on a precarious footing, first relying on “sugar king” Claus Spreckels for funds, then resorting to a questionable $2 million loan from a London syndicate. The loan entailed hidden costs that added another ten percent to the total obligation—not counting the interest—and the syndicate paid one of the men from Hawaii who negotiated it, G.W. Macfarlane, £2000 for entering into the deal.**

Then there was the disastrous expedition to Samoa to start a confederation of Polynesian nations. This brought Hawaii to the brink of war with Germany, which coveted Samoa for its own purposes. Kalakaua’s idea of an alliance between Polynesian peoples had echoes of his proposal to Emperor Meiji for Asian nations to unite in forming a counterweight against the dominant western powers. Germany, Britain, and the U.S. were negotiating among themselves about Samoa’s future, and when the tiny kingdom of Hawaii proposed to join their discussions, it was at first ridiculed and then ignored. Unfortunately, Hawaii’s envoy to Samoa went on a drinking binge during his January 1887 visit, and the vessel with six small brass cannons sent to represent the kingdom was plagued by mutiny and disorderly conduct. 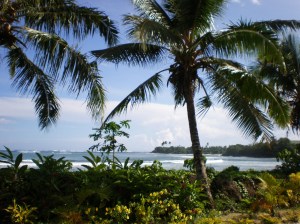 From the standpoint of the white community, the last straw came when the Hawaiian Gazette reported in spring 1887 that Kalakaua had accepted a bribe from a Chinese businessman for the issuance of an opium license.

It’s easy to imagine the scornful laughter that greeted these events. When an ordinary public figure does something questionable like take a bribe, disapproval can be expected, but Kalakaua was such a colorful personality that the response quickly morphed into ridicule. He was such an easy target for satire. He’d already been spoofed after his coronation with the pseudo-epic “The Crowning of the Dread King.” Now, two new pamphlets circulated among the missionary descendants, “Vacuum: A Farce in Three Acts” and “The Grand Duke of Gynbergdrinkenstein.”

Early in 1887, citizens opposed to the government of Kalakaua and his premier, Walter Murray Gibson, formed a secret organization called the Hawaiian League. Membership was strictly all-white except for a handful with part-Hawaiian ancestry. The league’s stated objective was “Constitutional, representative Government, in fact as well as form, in the Hawaiian Islands, by all necessary means.”*** The more radical members wanted abolishment of the monarchy and establishment of a republic—a few even called for assassinating the king—but ultimately the moderates prevailed. They would preserve the monarchy but drastically restrict its powers.

The Hawaiian League stealthily took control over an all-white militia called the Honolulu Rifles, established 1884. At the same time, merchants ordered crates of rifles to be shipped to Honolulu stores so that additional citizens could join in forcing a change in government. 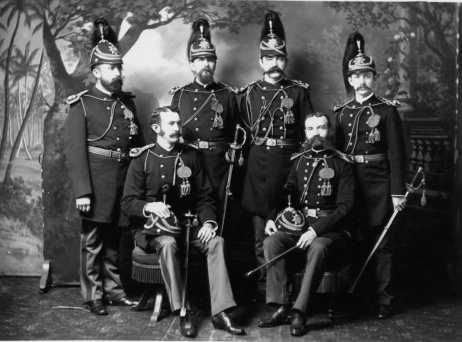 By late June the king knew about the rifle shipments—the rumor mill took care of that. Up until now he’d maintained an air of bravado, and it was more than a pose. He truly believed he’d always be able to take charge of events, as he’d often assured the skeptical William Armstrong.# But now he became uneasy. On June 27 he requested American minister G.W. Merrill to come to the palace—he wanted advice. Merrill told him what the king already knew, that leading citizens were making “loud complaints” about expenditure of public funds, the Samoan expedition, and other matters. Merrill said “the public” demanded removal of the present cabinet headed by Gibson.## That very night, Kalakaua called for his ministers’ resignation. But this was not enough.

On June 30 the League held a mass meeting. The king called out the Honolulu Rifles to keep the peace, unaware that they now acted under the League’s instructions. Many fiery speeches were made and, eventually, the attendees voted to pass a set of resolutions that made specific requests to the king. These were taken to the palace, and Kalakaua promised a written response.

On July 1 a new shipment of firearms arrived, although enthusiastic citizens were disappointed to find that most of them were small guns for the use of Chinese farmers in driving off birds from their fields. As men with rifles roamed the streets, the king had the palace fortified and placed armed guards around it. Meanwhile, he prepared his response to the resolutions, asserting in writing that he’d already carried most of them out—they mainly demanded the resignation of key officials, including Gibson and his cabinet. To a resolution that he should return the sum given as a bribe for the opium license, he denied he’d accepted a bribe but said he would follow the advice of the new cabinet. He further pledged not to interfere with constitutional processes.

The response went to the committee that had authored it, and a new League-approved cabinet was installed. But that was not enough, either.

Between July 1 and July 6, a special committee of the League prepared a new constitution. Late on the afternoon of the 6th, the document was read to the king. He listened in a gloomy silence that seemed, even to those who opposed him, “somewhat appalling.”### This was no longer the man dubbed “The Merrie Monarch.” When the reading was done, he argued points but frequently stopped to gaze into space, as if stunned and perplexed. At last, he grasped a pen and signed it. 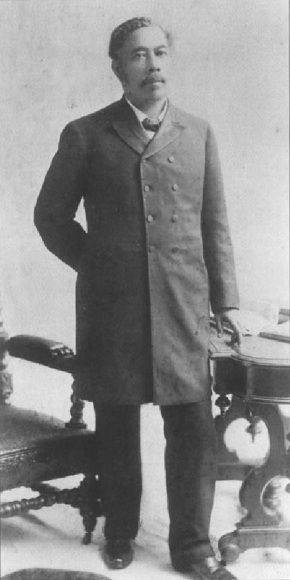 The constitution, in essence, made the king a ceremonial figure. The real work of the government was to be done by elected officials. He retained two powers: he could veto legislation, but the assembly could override that by a two-thirds vote; and he could appoint cabinet ministers, although he couldn’t call for their resignations.

The constitution called for radical changes regarding eligibility to vote. It made nobles of the assembly elected officials for the first time, but substantial property qualifications ensured whites would control that vote. For the lower half of the assembly voters had no property requirement—instead, a new literacy requirement was imposed. As a result, only about a quarter of ethnic Hawaiians could vote.

And for the first time in the history of Hawaii, there was a racial restriction. Legal scholar Patrick Hanifin writes: “Broadening the electorate for representatives to include all male residents would have created a new electoral majority: recent immigrants from Japan and China, most of them field workers in the sugar plantations. However, because there was no reason to think that these immigrants would support the Reform Party… persons of Asian ancestry were denied the vote, even if they had been able to vote under the prior constitutions.”+

Between the exclusion of Asians and the property and literacy barriers, the haoles now owned the vote.

Later that year, an plot was contrived by Robert Wilcox (who’d been connected with Celso Moreno) to overthrow the new government and restore the monarchy. When his plans were discovered, he was exiled to California. Two years later he returned and led 150 armed men in an attack on government offices. With the assistance of Marines from the U.S.S. “Adams,” the insurgents were repelled and Wilcox taken into custody. A jury of native Hawaiians found him innocent of conspiracy, but he made no more attempts at revolt.

Photographs of the king in his late years show a changed man, a morose expression on his face. His health in decline, he took a trip to California for a “rest cure.” But he’d never been able to resist any kind of festivity. Without the greetings and toasts, the jokes and the backslapping, the late-night hours of camaraderie, life was hardly worth living. He attended a glittering succession of balls, banquets, and receptions. This all came to an abrupt end when he suffered a stroke. Eight days later, attended by his doctor, attendants, and friends at San Francisco’s Palace Hotel, he died. At the age of 54, his body had entirely broken down. He had kidney disease—nephritis—compounded by heart problems and cirrhosis of the liver. 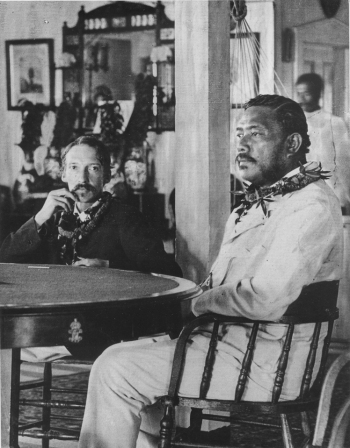 Robert Louis Stevenson and Kalakaua at the royal boathouse, February 1889.

After Kalakaua: A timeline

January 1891: Kalakaua’s sister Lili’uokalani assumes throne. Hawaii is suffering economic decline because of the McKinley Tariff, which eliminated advantages of the Reciprocity Treaty.

December 1892: Lili’uokalani proposes and signs into law new licensing for opium sales and lotteries as a revenue source. This is vehemently opposed by the white community. She proposes a new constitution that would restore power to the monarchy.

January 1893: A “Committee of Safety,” backed by U.S. Marines, forces the queen to give up her powers. She says she yields authority temporarily “to avoid any collision of armed forces.”

July 1893: Sanford Dole and his associates proclaim themselves the “Provisional Government of Hawaii” to rule until annexation by the U.S. They have to wait because  President Grover Cleveland opposes annexation on moral grounds.

January 1895: A pro-monarchy force of 600 attempts a counter-rebellion but is repelled. When a cache of weapons is found on the palace grounds, Lili’uokalani is arrested. She is tried and convicted of treason and placed under house arrest. She formally abdicates the throne.

July 1898: With William McKinley now in office as President, Congress passes a joint resolution to annex Hawaii, and it becomes U.S. territory. 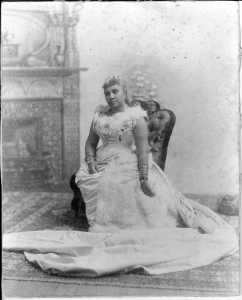 # William Armstrong was the king’s companion on his around-the-world trip and often advised him caution and moderation in dealing with the leading white citizens. Kalakaua always said he could keep control of things. After all, these were his subjects.

+ Patrick Hanifin, “To Dwell on the Earth in Unity: Rice, Arakaki, and the Growth of Citizenship and Voting Rights in Hawai’i.” Hawaii Bar Journal V:13, pp. 25-26.

I am an off-trail hiker, a student of history, and author of "Transvaal Citizen," "Murder at the Jumpoff," and "The Twelve Streams of LeConte."
View all posts by Jenny →
This entry was posted in Hawaiian History, History and tagged annexation of Hawaii, Bayonet Constitution, Hawaiian League, Honolulu Rifles, King David Kalakaua, Queen Lili'uokalani, Republic of Hawaii, Sanford Dole. Bookmark the permalink.

2 Responses to Ridicule and rifles: The Bayonet Constitution