Election and violence in Hawaii, 1874

This is the second in a series about King David Kalakaua of Hawaii.

It was a contest between a large boisterous man and a solemn, pious widow. Once again, a king had died without a successor, and Hawaii’s constitution called for a legislative vote to determine the next ruler.

As we saw in the last post, when King Kamehameha V died in 1872, two contenders quickly emerged—William Lunalilo and David Kalakaua. The former was so confident of support that he called for a popular vote, which he won in a landslide. This vote carried no legal force, but when the legislators convened for their balloting, they knew very well that if they ignored the popular will, they’d have reason to fear for their safety. The mobs gathered around the court house building made sure of that.

Just a year later, Lunalilo was dead of tuberculosis compounded by alcoholism. More than anyone else, Kalakaua seems to have anticipated the untimely end of Lunalilo’s rule. He’d conceded graciously when “Prince Bill” won the vote, and he accepted appointment as colonel in the king’s Household Troops. But within a few months of Lunalilo’s accession, Kalakaua was busily promoting a political party, “The Young Hawaiians,” with the crowd-pleasing slogan of “Hawaii for the Hawaiians.” To some observers, it seemed a bit odd that the party had its own military company.

Most likely, Kalakaua simply saw that the well-liked Lunalilo had such a problem with drink that, one way or another, he’d be unable to continue as ruler. This was no Ulysses S. Grant who was able to serve as commander-in-chief of the Union Army despite occasional binges. Lunalilo retreated into the bottle for days at a time, entirely disconnected from the world.

During the barracks mutiny of September 1873, some folks observed Kalakaua engaging in unusual activity. Queen Emma, who would soon oppose him in the next election, reported to her cousin that Kalakaua gave signals to the soldiers when he was acting as an intermediary in negotiations. “By using his hands in the native negative or vice versa [in traditional Hawaiian gestures], the men were to understand they must obey or do contrary to his address to them.”*

Kalakaua had no need for further intrigue after that, for Lunalilo grew very ill and soon died. Everyone knew Kalakaua wanted to try again  for the throne. An active and gregarious man, he’d held posts in government for years and as a member of the noble ali’i faithfully attended every legislative session. Many of the native Hawaiians looked up to him, but the foreigners weren’t so sure. The American minister, Henry Peirce, gave this assessment: “He is ambitious, flighty, and unstable. Very energetic, but lacks prudence and good sense.”**

Queen Emma soon emerged as Kalakaua’s opponent. She had been the wife of King Kamehameha IV and came from Hawaii’s chief clans. Among the ali’i, highest status came from connection with Kamehameha I (Kamehameha the Great). Emma boasted several of those connections. For one, her paternal grandmother was a cousin of Kamehameha’s most high-ranking wife.  By contrast, Kalakaua lacked that prestigious  tie, though he came from an old Hawaii clan.

Emma was one-quarter British by way of her maternal grandfather, John Young, who had served as advisor to Kamehameha I. Further British influence came in her childhood from the parents who adopted her in the Hawaiian hanai tradition. They were the British Dr. Thomas  C.B. Rooke and Emma’s aunt, Chiefess Grace Kam’iku’i Young Rooke. Emma grew up as an Anglophile and later in life visited Windsor Castle and corresponded with Queen Victoria.

Pictures of Emma show a beautiful woman with a disdainful expression. She must have been admired by men wherever she went.  Well educated, musically talented, and skilled in horsemanship, she had dark, penetrating eyes and a serious manner. At the age of 20 she married Alexander Liholiho, who had assumed the throne the previous year as Kamehameha IV.  Two years later she gave birth to Prince Albert Edward Kamehameha.

The king and queen delved into religious issues. They petitioned the Church of England to establish an Anglican branch in Hawaii. They were baptized upon the arrival of an Anglican bishop, and Queen Emma raised funds for the construction of St. Andrews Cathedral. The king made a translation of the Book of Common Prayer into Hawaiian. Emma was also known for establishing the Queen’s Hospital, a public institution serving native Hawaiians.

But tragedy struck. On August 27, 1862, the four-year-old Prince Albert died. According to one account, his father blamed himself for the death, which occurred after he gave the child a cold shower as punishment for minor disobedience. Another version says that Emma blamed Kalakaua’s wife, Kapi’olani, who she said was supposed to take care of Albert as  his governess. Just a year later, the king himself died of chronic asthma… or of grief, depending upon the source.

Hawaiian history is full of strange incidents told in contradictory ways. For instance, Kamehameha IV shot his personal secretary Henry Neilson in the chest in 1859, a man he liked perfectly well, because (a) he’d been drinking (but he wasn’t generally regarded as a drunk), or (b) he suspected Neilson of a flirtation with Emma (but she wasn’t the flirtatious type). The incident wasn’t reported in the papers, and Neilson died of the wound two years later.

Emma never remarried. After her husband’s brother, Lot Kapuaiwa, assumed the throne as Kamehameha V, there was talk of convincing him to take a wife, as mentioned in our last post.  One of the foreign ministers suspected that he was in love with Emma.***   This suspicion was confirmed in private conversation with the king. But discussions with the two parties made it clear that marriage was impossible, due to Emma’s devotion to her departed husband and her identification with the Anglican church, of which Kamehameha V was not a member. The king’s extreme obesity could have been another factor.

The question of successorship

When Lunalilo died, Emma claimed he’d expressed his wish that she follow him on the throne.  Many of the king’s associates did believe Emma was his choice—not necessarily because they supported her, but because they all knew he disliked Kalakaua. In  his last days Emma and her friends hovered around his bedside, dropping broad hints as he slipped in and out of consciousness, but the elusive Lunalilo passed away without officially proclaiming anything.

Kalakaua declared his candidacy for the throne the day after Lunalilo died, and Emma followed suit a day later.  Each one issued a proclamation, full of suitably grandiose words like “whereas,” “hereby,” and “perpetuity.” Kalakaua’s spoke of “permanent  independence” for Hawaii and “equity, liberty, prosperity, progress, and protection of the whole people.” Emma’s zeroed in on her claim of Lunalilo’s “wish and intention” that she be his successor.

Above all, Kalakaua wanted to avoid what had happened before, a popular vote with no legal force but effectively intimidating the legislators. Emma, on the other hand, requested her “beloved people… to assemble peacefully and orderly in their districts, and to give formal expression to their views.” That sounded a lot like the call for a plebescite in the last election, but she never gained enough traction to force an irregular popular vote.

In the end, the success or failure of the candidates depended not on platforms or promises or claims of succession but on how people imagined each of them saw the future of the Hawaiian nation. Emma naturally took a pro-British stance. Kalakaua made a lot of noise about continued independence that alarmed some of the American community—but he was not explicitly anti-American. Therefore, the dominant pro-American business interests came around to support him.

Mass meetings were held across the islands; fiery speeches were made; and feelings ran high among the populace. American and  British ministers in Honolulu began to fear violence. At the time of the election, three warships were moored in the Honolulu harbor—two American and one British. A contingency plan was made for a shore-to-ship signal requesting the landing of troops, in case things got out of hand.

February 12 was the day of the vote. Hundreds of “Emmaites” gathered at her house and marched to the court house to join crowds already there. Shortly after noon the votes were cast. It was 39 for Kalakaua and 6 for Emma. The news quickly spread to the crowds. As legislative members attempted to leave the building, they were attacked and in some cases wounded before they escaped back indoors. It was only the absence of firearms that prevented widespread fatalities. Rioters tore apart a carriage waiting at the door and used parts of it as clubs; the court house was pelted with sticks and stones. 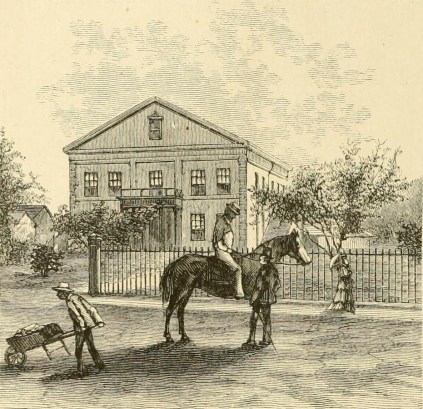 Guards at the front entrance held off the mobs, but the rioters ran around back and got in that way. They rampaged through the building, breaking windows and destroying desks, chairs, books and papers. Quite a few legislators were wounded, one of them fatally. An unfortunate soul was thrown out of a second-story window and pummeled by the crowd. Policemen took off their badges and joined in the fray.

After a half hour or so, the shore-to-ship signal was displayed. A hundred and fifty American troops arrived on the scene, soon followed by 70 men from the British vessel. The crowds cheered the British seamen, thinking they had come to join Queen  Emma’s cause. This was of course a sadly naive view.

The troops soon restored order. During the rioting, several people had hurried to Emma’s house, thinking they could persuade her to address and soothe her supporters. But she’d told these visitors that the riot was “no concern of hers.”# It was not until the top foreign ministers made a formal request to her that Emma emerged, later that day, and addressed the crowds, telling them they must accept that Kalakaua had been duly elected. Wild rumors had been flying around that this election had been illegal, soon to be followed by a second one putting Emma on the throne.

And so calm was restored, but relations between Emma and Kalakaua never became friendly.

I am an off-trail hiker, a student of history, and author of "Transvaal Citizen," "Murder at the Jumpoff," and "The Twelve Streams of LeConte."
View all posts by Jenny →
This entry was posted in Hawaiian History, History and tagged David Kalakaua, Election Riots of 1874, Honolulu, Kamehameha IV, Kamehameha V, Queen Emma. Bookmark the permalink.