King Kalakaua ruled the kingdom of Hawaii from 1874 to 1891. He was the next-to-last ruler, succeeded by his sister Lili’uokalani. She lasted just two years before she was overthrown by a group of local politicians and businessmen, most of them American. Backed by US Marines from the USS “Boston,” they forced her removal from the throne. Hawaii was annexed by the US in 1898.

Kalakaua was, in the end, a tragic figure,  a man not easy to understand: well educated yet naive; eager to advance his kingdom’s interests yet prone to decisions that were disastrous for his people; an advocate of native Hawaiian culture yet an avid admirer of the trappings of  European tradition. He was preyed upon by manipulative people in a manner that may remind  followers of this blog of the way King Lobengula of Matabeleland was preyed upon by Cecil Rhodes and his associates.

Here are a few highlights of Kalakaua’s reign:

I find his story fascinating and I hope you will too. 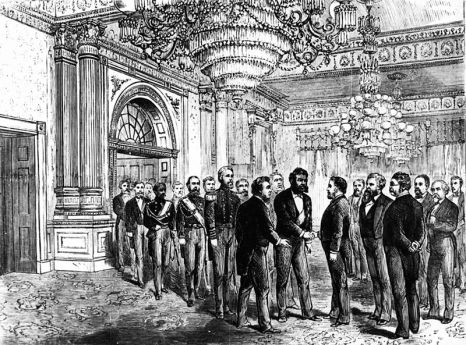 I am an off-trail hiker, a student of history, and author of "Transvaal Citizen," "Murder at the Jumpoff," and "The Twelve Streams of LeConte."
View all posts by Jenny →
This entry was posted in Hawaiian History, History and tagged Celso Moreno, Claus Spreckels, David Kalakaua, Queen Lili 'uokalani, Ulysses S. Grant. Bookmark the permalink.