“Unless I very much mistake, this small nation, Eastern to the backbone, is about to testify by the mouth of her cannon that the six Great Powers are not all the world but only a part of it.”* —General Sir Ian Hamilton, April 1904.

Hamilton is probably best known for his role in the Gallipoli campaign of WWI. In 1904 he was among a mob of military observers and newspaper correspondents accompanying the Japanese army. The reputation he’d recently gained in the Boer War, and Britain’s position as Japan’s only Great Power ally, gave him access to top levels of Japanese command. He would have many interesting things to say about the Battle of Yalu River. 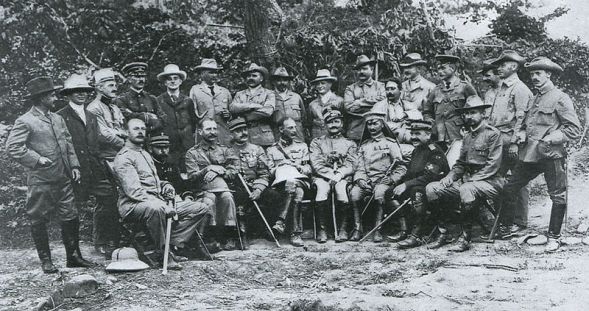 So far our account has spoken only of naval operations. While Togo and Makarov skirmished in the waters around Port Arthur, Russian army commander General Alexei Kuropatkin at last arrived at Liaoyang in Manchuria, which would serve as his base. His strategy was to avoid major battles for about six months, until sufficient troops could be railed in via the single-track Trans-Siberian. However, it was imperative that he hold the line at the Yalu and prevent Japanese troops from crossing from Korea into Manchuria.

Kuropatkin had good reason for concern. Major General Kuroki Tamemoto had been moving three divisions of the Japanese 1st Army northward through Korea. In February he landed the 12th Division at Chemulpo (Inchon) for a march toward Chenampo, near Pyongyang. There they were joined by the 12th and the Guards Divisions, who landed at the mouth of the Taedong River. By April 21 the three divisions were concentrated at Wiju on the south bank of the Yalu, just below its junction with the Ai River and not far upstream from the Yalu estuary. The divisions took up positions out of sight of Russia’s Eastern Detachment. Lt. General Mikhail Zasulich had about 25,000 troops spread along many miles of the Yalu’s north bank. Kuroki had 42,000 massed at a single point.

To ease the way for its military operations, Japan had forced Korea into the status of a protectorate as of February 25. But this was less important day-to-day than the army’s strategy of hiring local laborers at good wages and paying for provisions obtained locally. Residents of northern Korea remembered that the Russian army had behaved quite differently in its incursions into their area.

The whole Japanese strategy was thought through carefully and featured truly ingenious methods of deceiving the Russians. Their relatively friendly relations with local  Koreans made it possible for Japanese spies disguised as Korean fishermen to obtain intelligence about Russian positions. As Hamilton described it, the Russians sat “still as a family group before the photographer’s camera till all was fully prepared.”

The first order of business at the Yalu was to take control of key islands that lay amidst the river’s twining sandbar channels. On the night of April 25, two islands were captured with no opposition; the third was taken after a brief firefight. Now the Japanese began building a bridge to Kinteito Island—a major construction 260 yards in length on trestles made of heavy timbers. In a delightful piece of irony, the Japanese made use of tools abandoned by the logging company founded by the Bezobrazov Clique, those expansionist cronies of Tsar Nikolas known as “the Koreans.”

Best of all, the bridge was only a decoy, designed to draw fire from the Russians, disclosing the position of their gunners and the strength of their artillery. And so the Russians pounded away at it.

Japanese troops crossing the Yalu on a pontoon bridge.

At the same time, the Japanese assembled nine other short, portable bridges that could be rapidly moved into position. The bridges’ total length came to nearly a mile, one-third of it made of conventional pontoons and the remainder improvised from local materials. Small Chinese junks served as substitute pontoons, and ploughs from nearby Korean farms made ideal anchors.

To give Zasulich an idea where he should concentrate his forces, Kuroki ordered a demonstration of gunboats against Cossack detachments downstream and arranged for junks laden with lumber to maneuver conspicuously near the village of Antung. Zasulich duly moved the bulk of his troops to that area.

The artillery—36 field guns and 20 custom-made 4.7-inch howitzers—were ordered to mass on Kinteito Island during the night of April 29. The soft, sandy soil eased the work of entrenchment. Hamilton wrote, “Much artifice was employed to conceal the position from the Russian gunners…. Trees were transplanted a short distance in front of the batteries to hide the tell-tale flash of discharge, and were carefully chosen from amongst those which were growing either directly in front or directly behind the entrenchment which was to be concealed. Thus next morning the landscape appeared unchanged from the Russian side of the river, as the fact that a tree of a particular shape had advanced or retired  200 or 300 yards during the night, was naturally imperceptible.”

In addition, strong bombproof shelters were dug for the men, and observation stations were established on high ground 3000 yards to the rear, connected by telephone with the howitzer batteries. And this was all done overnight. 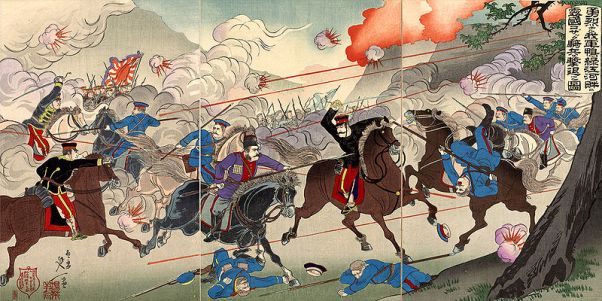 The Japanese repulse the Cossacks. Painting by Watanabe Nobukazu.

The next day’s battle seemed almost an anticlimax. The infantry made a three-pronged advance, reaching the bulk of the Russian trenches at the hamlet of Chuliencheng, opposite Wiju. As the Russians retreated, the 12th Division swung around from the right, trapping many of them at a gorge located on the road heading north toward Fenghuangcheng. The artillery duel ended quickly, as the heavy Japanese howitzers and numerous field guns easily put the Russian guns out of action, and General Zasulich foolishly refused to pull back to a better position.

Hamilton wrote, “The Japanese were invisible and comparatively invulnerable, the Russians were conspicuous and everywhere most vulnerable. In thirty minutes the Russian guns were silenced…. Why, why did the Russian great general staff disdain to take a lesson from the Boers, who had so recently repeated for the benefit of the British, and for that of the world as well… the lesson of how an inferior artillery should be worked?”

The Boer War was fresh on his mind, having ended just two years earlier. The British had won, but the conflict proved much more difficult than expected. Now, just as the British had underestimated the Boers, the Russians underestimated the Japanese. The  point Hamilton made was not that the Japanese  resembled the Boers (he saw Emperor Meiji’s soldiers as akin to the Ghurkas), it was just that the Russians could have learned from the Boers. 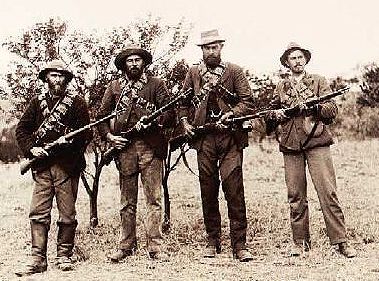 And those lessons applied not just to unequal artillery, he thought, but to marksmanship. “The Russian soldier is the worst shot existing in any great army in Europe,” he observed. “He gets but few rounds for practice, and these are fired mostly in volleys.” Firing as one of a large group, the individual “never knows, and never can know, whether his bullet was one of those that hit the target.”

Therefore, in the Battle of Yalu River, “the Japanese were in luck to have had volley-firing Russians behind the parapets, instead of a few hundred Boer sharpshooters. The Russian trenches were similarly placed to those from which the old Boer warned his little nephew firing at his side not to hurry, and to continue still to take careful aim; ‘for,’ said he, ‘notwithstanding the Rooineks are now only 400 paces from us… not a man of them can ever reach you here if you hit one with every three cartridges, as you were taught to do with the springbok under pain of a whipping’.”

* All quotes are from General Sir Ian Hamilton, A Staff Officer’s Scrap-Book During the Russo-Japanese War (vol. 1).  London: Edward Arnold, 1906.

I am an off-trail hiker, a student of history, and author of "Transvaal Citizen," "Murder at the Jumpoff," and "The Twelve Streams of LeConte."
View all posts by Jenny →
This entry was posted in History, Japanese History, Military History, Russian History and tagged Alexei Kuropatkin, Battle of Yalu River, Kuroko Tamemoto, Mikhail Zasulich, Russo-Japanese War. Bookmark the permalink.