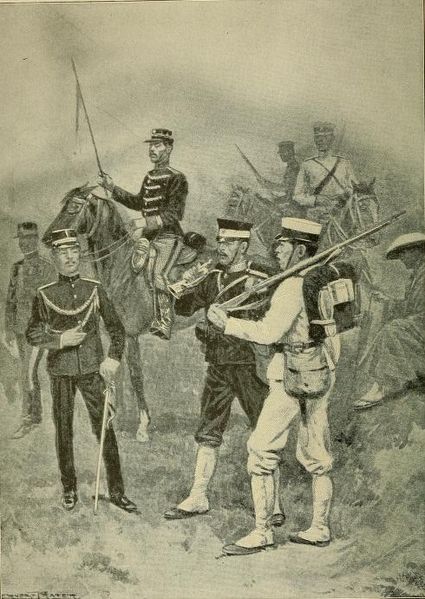 Soldiers of the Japanese army. Illustration by Ernest Prater.

The two armies—and navies—about to face off against each other came from very different worlds. For the most part Japan stood in a better position—a circumstance the Russians never would have dreamed of. However, Japan expended far more lives than necessary, particularly when it came to frontal assaults against an entrenched position. Military technology had advanced nearly to the stage achieved in WWI, significantly in respect to machine guns, no longer hand-cranked but firing automatically. The Japanese learned hard lessons that were forgotten by the world ten years later, when the Great War began. This amnesia is especially incomprehensible considering that military observers from many nations were present in the Russo-Japanese War.

In this gathering of Russian soldiers, the commanding officer wears the pale greatcoat.

The Russian armed forces suffered from the defects one might expect in a nation governed by a paranoid and backward-looking regime. Under the Romanovs, appointments and promotions had much more to do with social connections than competence. One advanced through the ranks by cynically playing the game. The army tolerated misbehavior by officers, such as accumulating gambling debts and drinking vodka at all-nighters that ended in a ritual smashing of crockery. On the other hand, the Russian army had a bureaucracy that might have outdone that of the Pentagon. The lethargy of the command structure became painfully evident when it came to provisioning the troops. Procurement of necessities such as uniforms was affected by corruption, so the foot soldier was issued boots that fell apart after a 20-mile march.

The rank-and-file were mainly illiterate peasants—especially in the Eastern Military District, which provided most of the troops used in the conflict with Japan. The better-trained, better-educated troops of the European Military District were held in reserve in western Russia because the Tsar worried about political unrest around Moscow and Petersburg.

For the very reason of their harsh way of life, the peasants had great powers of endurance. They lived on the strength of their religion, and many felt blind loyalty to the Tsar. This seems incredible in view of the indifference of the ruling class to the miserable lives they led, even after Alexander II’s emancipation of the serfs, but perhaps this simple faith was what made life tolerable. The peasants understandably felt no loyalty to their aristocratic officers, which made it difficult to achieve “esprit de corps.”

Uniforms had been designed in 1881 under Alexander III’s program of Russification: soldiers wore billowing blouses modeled on traditional peasant smocks. These were dyed khaki in varying hues, ranging from dark green to a bilious shade of yellow. In the winter the blouses were replaced by a long tunic fastened to the side. For  cold weather a heavy greatcoat was worn, with hems that dragged in the mud, so that soldiers invented ways of hitching it up. A sheepskin undercoat could be layered beneath the greatcoat in the bitterly cold Manchurian winter. Soldiers wore distinctive sheepskin hats such as the shaggy “Manchzurka,” though some versions had the disadvantage that when they were pulled low enough to keep the ears warm, they practically covered the eyes.

Keeping feet warm and dry was a perpetual problem. The men were issued knee-high soft leather boots of poor quality, not waterproof. Some soldiers resorted to wearing soft Chinese shoes stuffed with an insulating material.

Many in the Japanese army were veterans of the Sino-Japanese War of 1894-95, which Japan had easily won. This gave them valuable combat experience. But as we look back from the 21st century, it may be hard to appreciate another overriding circumstance: Japanese society after the 1868 Meiji Restoration was distinguished by vigorous, optimistic attitudes.

It was still true that the emperor was considered semi-divine, and Japan had not by any means cast aside its traditions. But the nation was engaged in rapid industrialization, and ideas of progress were important.

One aspect of this fast-paced change was a focus on education. High rates of literacy among the rank-and-file meant that ordinary soldiers had more in common with their officers than was the case for the Russians. This tended to make for better morale.

Officers and rankers shared a concept of service to the emperor. Ideas of discipline were part of the culture rather than an artificial construct imposed in the military setting. And this could merge with a feeling of self-sacrifice, though not always taken to a kamikaze extreme.

In the rapidly changing Meiji world, military appointments did not rest on social connections to such a large degree as in Russia. Officers tended to work hard to improve their skills. Another key difference lay in the relatively comfortable living conditions for the rank-and-file, with ample food rations and even limited issues of cigarettes and alcohol.

Like the Russian uniforms, the Japanese uniforms had been designed in the 1880s. They held up fairly well, although the dark blue color of the hooded greatcoats caused problems in the Manchurian winter: they stood out too sharply against the snow. Soldiers resorted to making a sort of loose overall out of their summer khaki uniforms and wearing that as camouflage atop their coats. Winter uniforms in a pale khaki color were issued as the war continued.

A sheepskin inner layer could be worn under the greatcoat, and the army made coats out of blankets donated by the Japanese public. Ear protectors were made from ratskins collected from citizens when the government offered a bounty on rats.

Japanese footgear consisted of hobnailed shoes and sometimes, in the summer, soft fabric shoes with a separated big toe. The latter presented a problem when the Russians took to scattering tacks on the ground. 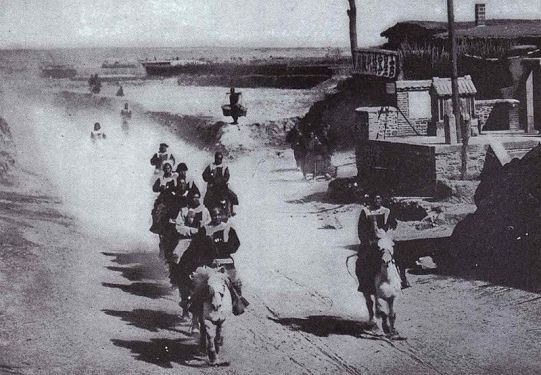 The Honghuzi were just as troublesome during the Russo-Japanese War as during the Boxer Uprising.

In my post titled China and the Trans-Siberian Railway, I mentioned the Honghuzi of Manchuria (also known as Chunchus or Khunhuzy). They fought against the Russians when the latter occupied Manchuria during the Boxer Uprising, and they continued to vandalize the rail lines to the Russian ports of Vladivostok and Port Arthur. In January 1904, before the Russo-Japanese War even began, they were recruited by the Japanese command and formed into covert units.

The Chinese units made guerilla attacks on the rail lines and supply depots around the Russian base at Liaoyang. Unaware of the Japanese involvement, the Russians blamed these attacks on the general lawlessness in Manchuria.

An American adventurer/journalist/roving doctor named Louis Livingston Seaman traveled to the area in 1904. He and his companion, a Captain Boyd, went in search of the Honghuzis. “We hoped to see for ourselves something of the characteristics and methods of those 10,000 or more guerillas that on the west infest the border of the fighting zone in Manchuria, harrowing the rear and right flank of the Russian army, compelling it to quadruple its Cossack guards…. The Hung-hutzes are excellent horsemen, well mounted and armed, who for centuries have lived as outlaws and brigands, defying the authority of the Imperial Government, roaming at will, levying tribute, and hesitating at nothing in the calendar of crimes in the accomplishment of their nefarious purposes.”#

Seaman brought along a photograph of himself with a ranking Chinese statesman he had befriended. With the aid of this he obtained a letter of introduction to a leading merchant in the Liao valley, and with that he and Boyd established good relations with the local community. This was aided by Seaman’s copious gifts of choice exploding firecrackers to his new friends.

Soon Seaman and Boyd were presented to the “head robber of the Hung-hutzes,” a man called General Chung Tsor Lin. He turned out to live in a luxurious home filled with Ming porcelain and cloisonne teapots. He served his guests glasses of fine Madeira, and everyone had a good time. From another guest Seaman and Boyd “learned what we had suspected before: that these robbers were now really officered by the Japanese…. some of the Japanese officers were disguised as Chinese, and were doing most effective work…. Two days before we arrived a party of Russians were attacked by 200 of these bandits, seven miles from Hsiu-Min-Tung. Five were killed and four decapitated, their heads being carried to camp on pike poles.”

On occasion, though, the Honghuzi worked for the Russians. Ivanov and Jowett write: “A major of the Russian Frontier Guards relates in his memoirs how he was alarmed to see a group of armed Chinese crossing the railway line ahead of his train, and pointed them out to a fellow officer. The latter told him  not to worry—‘they’re ours’; when asked how he could tell, he replied ‘because they’re not shooting at us.'”

*A. Ivanov and P. Jowett, The Russo-Japanese War of 1904-05. Oxford, UK: Osprey Publishing (Men at Arms Series), 2004. The book is not a chronological account of the war but an in-depth exploration of the armies, the military technology, and the uniforms. The authors have cultural and sociological insights that take this far beyond a compendium of factual detail.

#Louis Livingston Seaman, From Tokio Through Manchuria With the Japanese. New York: Appleton, 1905.

I am an off-trail hiker, a student of history, and author of "Transvaal Citizen," "Murder at the Jumpoff," and "The Twelve Streams of LeConte."
View all posts by Jenny →
This entry was posted in History, Japanese History, Military History, Russian History and tagged Russo-Japanese War. Bookmark the permalink.