China and the Trans-Siberian Railway

The Honghuzi bandits of Manchuria sabotaged the rail lines.

This is the first of several posts about the Trans-Siberian.

I have a book titled The World’s Great Railways by G. Gibbard Jackson, published 1927.* It was a source of delight for my father as a boy. He turned its pages countless times, gazing at the color plate illustrations of powerful steam locomotives rushing out of tunnels or chugging through the Alps or Canadian Rockies.

The chapter on Asian railways begins with the Trans-Siberian. “As first planned and built a good deal of the line was in Chinese territory, and the raiding bands of Manchurians played havoc with the road of steel. These rovers wanted steel for their pikes, swords, and other purposes; here it was to hand, and they took it as they wished, with terrible results for the railway authorities.”

I dismissed this as colorful embellishment until I started learning about geopolitical aspects of the railway. The Trans-Siberian is often understood in terms of its internal significance, as a means of opening up communication and trade between European Russia and Siberia. That was how Tsar Alexander III described it in 1891 when work officially began: “I want to connect Siberian regions with the rest of the Russian railway infrastructure,” he proclaimed in his decree. 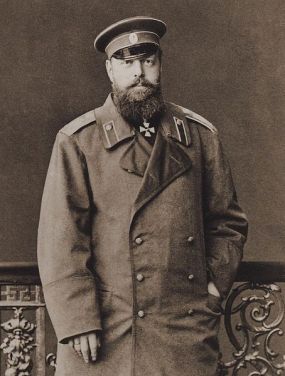 But relations with China and, later, Japan had at least as much to do with the railroad’s development. By the time the line was completed, four international conflicts all played a major role: the Second Opium War, the Sino-Japanese War, the Boxer Uprising, and the Russo-Japanese War.

For decades, various interested parties had been urging construction of a railroad. The Siberian governors argued for it. Foreign investors proposed schemes. An American named Perry Collins visited Siberia in 1857 to investigate the feasibility of Russo-American trade via the Amur River.

Goods would be railed from central Russia to Chita on the Shilka River, an Amur tributary, and transferred to barge for movement to the Pacific coast at Nicolayevsk, a port where American schooners already called. But the Russian government rejected Collins’ proposal, claiming the funds for a rail link to Chita couldn’t be raised.

Collins’ plan had another drawback: Nicolayevsk stood on the shallow waters of the Straits of Tartary, ice-bound much of the year and unable to accommodate deep-draft vessels. But the Russians were soon to develop a far superior port at a place they called Vladivostok, up till then occupied only by huts of Chinese fishermen. In 1860, Russia won vital territory in that area as a consequence of the “Unequal Treaties” agreed by a weakened China after the Second Opium War. It ran southward from the mouth of the Amur to what became known as Golden Horn Bay.

The Russians had one major headache concerning Vladivostok. By far the shortest route from central Russia to this key port lay across Manchurian territory south of the Amur. To stay along the river would drastically increase the mileage of any railway that might be built.

Nevertheless, the Russians soon built Vladivostok into a booming port city, of strategic importance even before the railroad construction. And helpfully for the Russians, in 1858 the “Unequal Treaties” had already resulted in another territorial expansion in which Russia had gained control of Outer Manchurian lands north of the Amur. 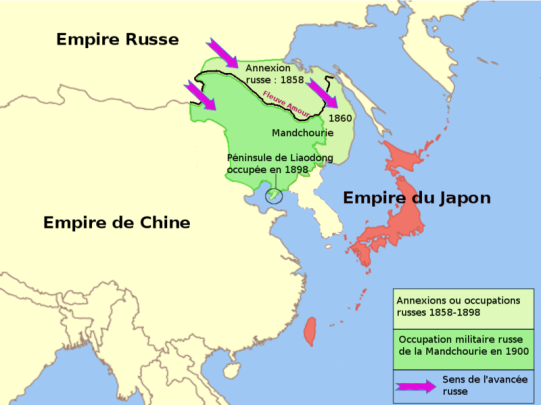 This Wikimedia map is in French, but you can figure it out.

The region was so sparsely populated that the Russians hardly noticed the incursions until around 1885, when Siberian Governor-General Alexis Ignatyev brought this troublesome matter to the attention of the Tsar. The situation surely demanded the movement of Russian troops to the Manchurian border—but how to get them there? Now plans for a railroad really started rolling, although Alexander still spoke publicly only of “satisfying the needs of this rich but neglected region.”

In 1887, three expeditions set forth to determine routes for the Trans-Siberian. One established a route from Chelyabinsk in the Ural Mountains to Lake Baikal. Another laid out the route from Lake Baikal to the east and along the Amur River. And the third determined the route between Khabarovsk on the Amur and Vladivostok—along the Ussuri River. 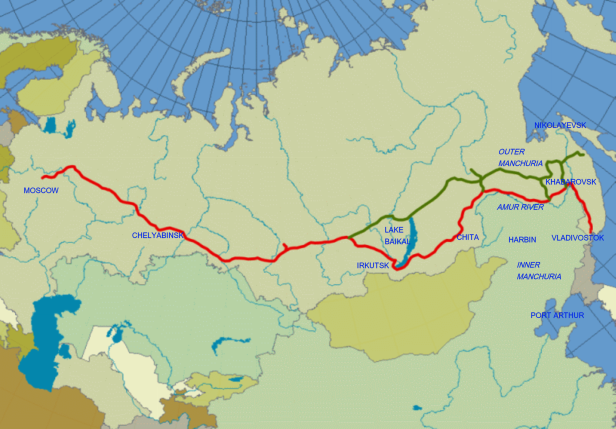 Click for zoom. The green line is the Baikal-Amur Mainline, a modern addition.

When construction of the railway officially began May 1891, Tsarevitch Nikolas II laid the first stone and a silver plate at the station in Vladivostok. The railway would be built starting from both ends at once, similar to the U.S. transcontinental line.

Construction proceeded with excruciating difficulty, across regions of bottomless marsh and in conditions of bitter cold. Bridges had to be constructed across wide, flood-prone rivers. I will describe all of this in my next post. By 1900, the line had been built from Chelyabinsk to the Ob River, from the Ob to Irkutsk, and from Lake Baikal (with a gap around the lake) to Sretensk on the Shilka River, near Chita. At the same time, the Vladivostok-Khabarovsk line—called the Ussuri Line—had been completed.

This left uncompleted only the long stretch along the Amur from Sretensk to Khabarovsk—known as the Amur River Line. But international developments conveniently rendered this moot. At any rate, it was not until after 1905 that Russia had no alternative to building the Amur River section. When Japan won the Sino-Japanese War of 1894-95, the “Triple Intervention” of Russia, Germany, and France forced concessions from Japan even though it was the victor. This led to Russian control of the strategic Liaodong Peninsula—and  a de facto Sino-Russian alliance. The complex details are a subject for another blog.

In 1896 China granted Russia a concession for construction of the Chinese Eastern Railway across Manchuria. Work started promptly in 1897 and was finished by 1901. (By contrast, workers on the short Circum-Baikal portion of the Trans-Siberian were still blasting their way through dozens of tunnels.) In Manchuria, the Russians had plenty of motivation, as the CER would give them direct access to both Vladivostok and what they called Port Arthur, at the tip of the Liaodong Peninsula. The line ran from just east of Chita to Harbin in central Manchuria, where it split to connect with the two ports. Russia’s busy construction at Port Arthur clearly signaled its intent to push into areas strategically important to the Japanese: this was was to be a major cause of the Russo-Japanese War, 1904-05.

Not only were the Japanese none too pleased with this Russian expansionism, the Manchurians didn’t care for it either. Although the Peking government had granted the CER concession, the Qing officials in the capital city were far removed from the residents of Manchuria. These people came from a different ethnic background—Mongol and Turkic, rather than Han Chinese. They lived in a rugged area that had been referred to as “Chinese Tartary” by the Europeans starting in the 18th century. Bitterly cold and dry in the winter, battered by thunderstorms in the summer, mountainous and wild, Manchuria was a place of fierce, nomadic people. The descriptions of the Manchus, particularly the famous Honghuzi bandits, are reminiscent to me of accounts about the Comanche Indians roving the high plains of Texas. The parallels extend to the horsemanship, the lawlessness, and their apparent delight in torturing and killing their captives. 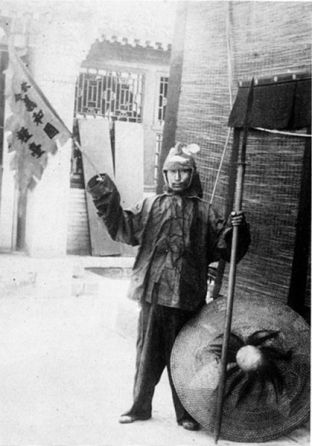 As soon as the rail lines were laid down, the Honghuzi sabotaged them. In June 1900, during the Boxer Uprising—a violent action of Chinese protesting foreign intrusion—Manchurians attacked the Russian town of Blagoveschensk on the north bank of the Amur. In return, the Russians drove nearly 8,000 Chinese and Manchus at bayonet-point into the raging river, where their bodies covered the surface from shore to shore. Tsar Nicholas used the Boxer unrest and attacks on the rail lines as an excuse to send 200,000 troops into the area. They acted indiscriminately, killing civilians, burning and looting villages. Manchu fighters battled to the death, but by the end of September 1900, the Russians occupied all of Manchuria. And unlike their European and U.S. allies during the Boxer unrest, they did not withdraw their troops when the conflict ended. 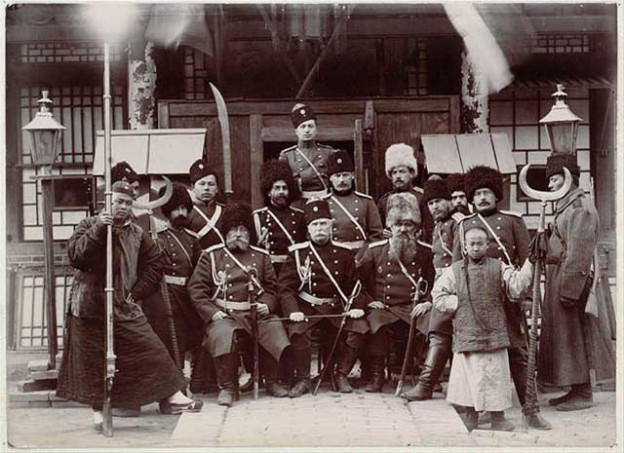 Russian soldiers during the Boxer Uprising.

The Honghuzi bandits continued guerilla warfare against the Russians, taking what must have been special pleasure in sabotaging the vulnerable CER lines. When the Russo-Japanese War began, the Honghuzi fought alongside the Japanese. After the Russians recovered from the loss of that war and subsequent severe domestic turmoil, they gradually completed the Amur River Line. It became operational in 1916, twenty-five years after construction began on the Trans-Siberian.

I am an off-trail hiker, a student of history, and author of "Transvaal Citizen," "Murder at the Jumpoff," and "The Twelve Streams of LeConte."
View all posts by Jenny →
This entry was posted in History, Railways, Russian History and tagged Boxer Rebellion, Honghuzi bandits, Manchuria, Russo-Japanese War, Second Opium War, Sino-Japanese War, Trans-Siberian Railway. Bookmark the permalink.

2 Responses to China and the Trans-Siberian Railway